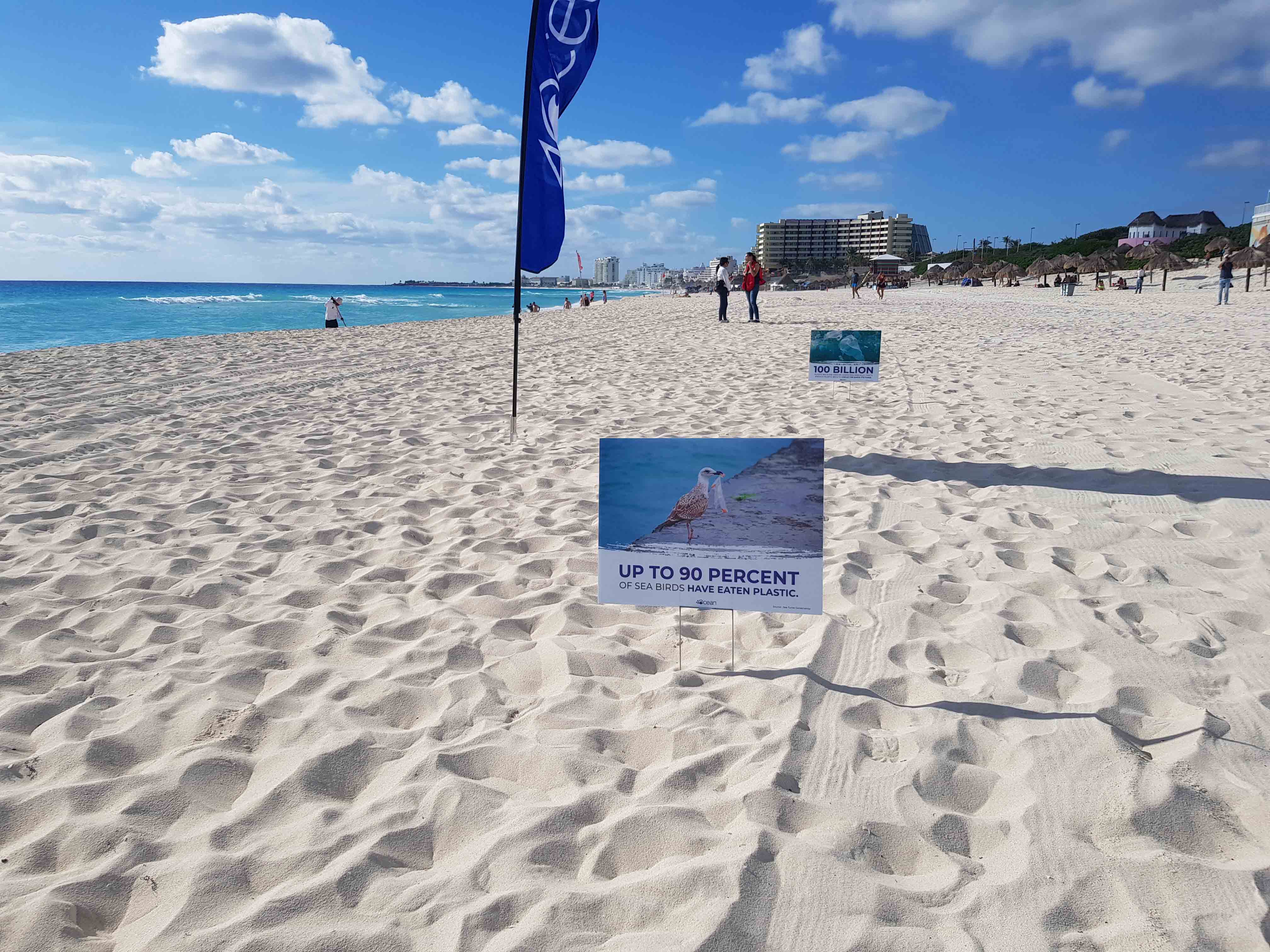 A Beach Clean with 4Ocean

While scrolling through my Facebook feed I stumbled upon a post about a 4Ocean beach cleanup in Cancun, November 18, 10am to 12 noon. Since I had been having serious doubts about the charitable motives of the 4Ocean company* I decided to drive up on Sunday morning to check it out.

I arrived at Playa Delfines at 9.15am. The Facebook post had said to come early in order to get free tickets to the movie #Aquaman (available to the first 400 people). I wasn’t that interested in the movie tickets but figured I’d get there early so I could have a look at the beach before the cleanup started. I mean, they expected more than 400 people and 400 people cleaning up a beach for 2 hours means it must be covered in trash.

It is important to know a bit more about Playa Delfines. Playa Delfines is a Bandera Azul (Blue Flag) beach and this is quite a prestigious eco-label. In order to be called a Blue Flag beach you must meet and maintain a series of stringent environmental, educational, safety, and accessibility criteria**. I couldn’t imagine Playa Delfines would be so dirty that it needed a large beach cleanup event. I assumed therefore, that the reason they picked Playa Delfines was to get maximum media exposure as this is a well-known public beach in the Cancun hotel zone and would most likely draw a lot of (media) attention. I was right.

Once at the site I headed over to the 4Ocean registration table. I signed a release form, was given a blue 4Ocean t-shirt, a large hessian (burlap) bag with the 4Ocean logo and a pair of gloves. They told me to walk the beach, spread out, and to pick up non-organic trash and be on the lookout for microplastics. The trash was to be handed in no later than 11.45am after which it would all be put together and sorted by 4Ocean volunteers. 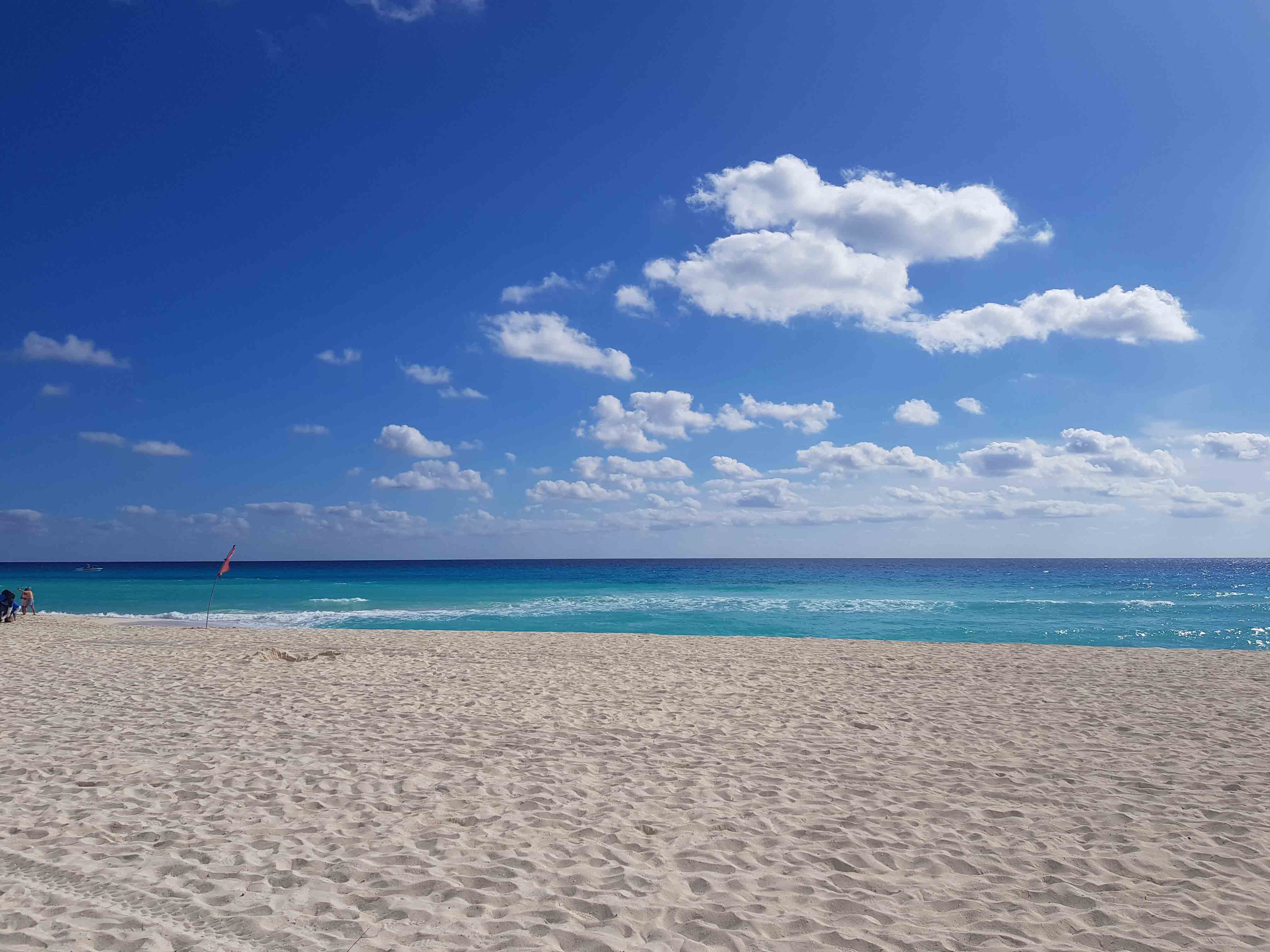 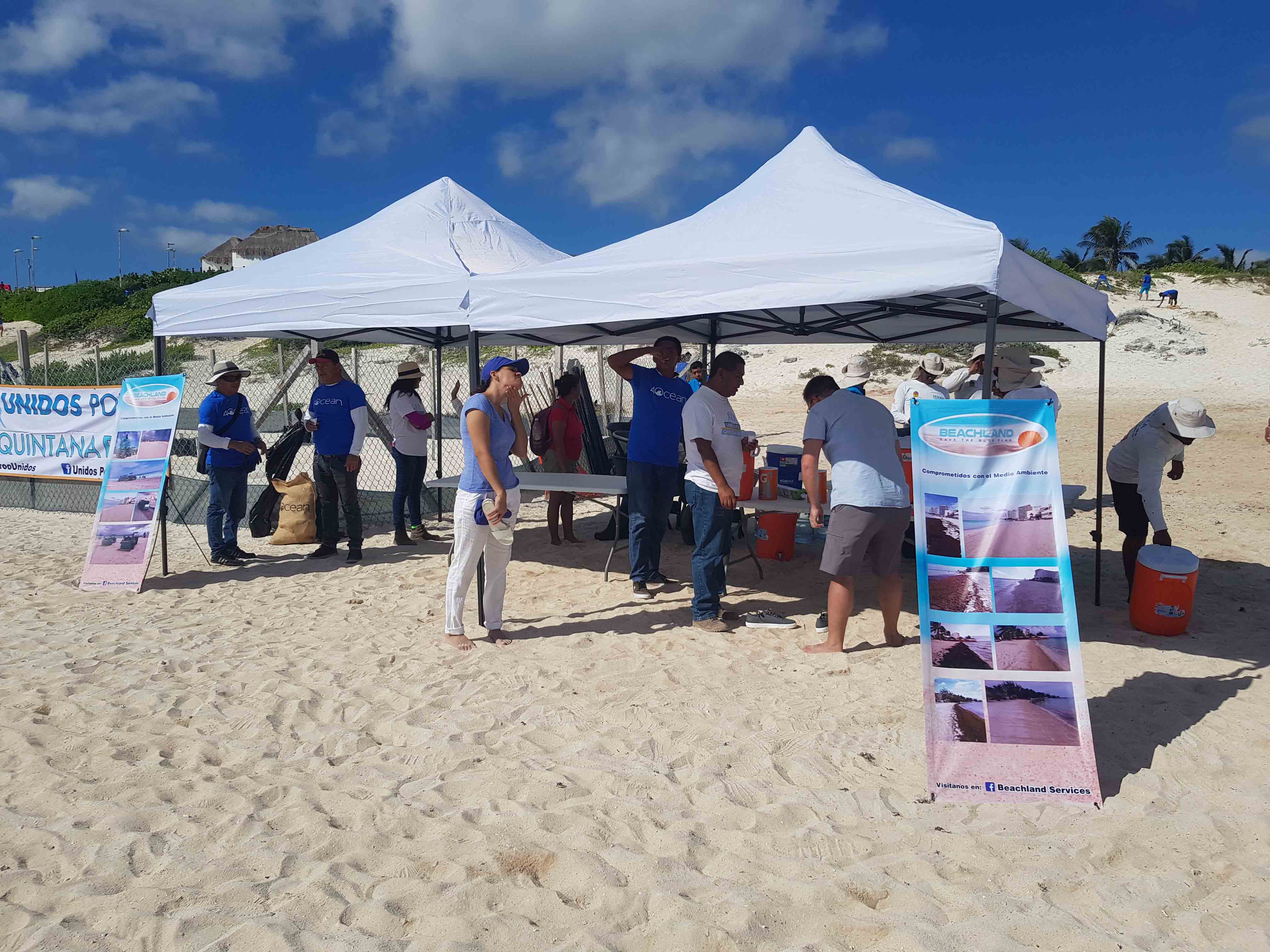 “I started to walk the beach at 10am in search of trash. After about 10 minutes I had found one cigarette butt and a 2 cm piece of cellophane plastic, I put both in the pocket of my shorts and walked on. And on. And on. I got bored.”

Towards the end of the public beach (after which it becomes a hotel concession) there was a stand of an organisation called Unidos por Quintana Roo and a company called Beachland. I struck up a conversation and this is where it got interesting.

Unidos por Quintana Roo is an organisation that is set up by the state government of Quintana Roo to deal with the sargassum problem that has increasingly been affecting the state’s beaches. In the municipality of Cancun this organisation has contracted a company called Beachland. This company cleans up the seaweed from Cancun’s public beaches. They work 7 days a week and their day begins around 4am so that the beach is ready, sargassum and trash free, at 10am when the tourists start arriving. The collection of trash is responsibility of the municipal government but Beachland will also pick up trash when they run into it. No wonder I couldn’t find any trash! The sargassum is collected mechanically (tractors) and manually (rakes and wheelbarrows). Once collected the sand and seaweed are separated and then the sargassum goes to the deposit. I spent about half an hour talking to Victor Acosta, the Unidos por Quintana Roo representative, and I was really pleased to hear about the work that is being done by the state, local businesses, organisations, and citizens to handle the Sargassum problem. It has taken quite some time for people to accept that this Sargassum problem is not going away and needs to be addressed. I left feeling optimistic about the work that is being done and the commitment of the parties involved. 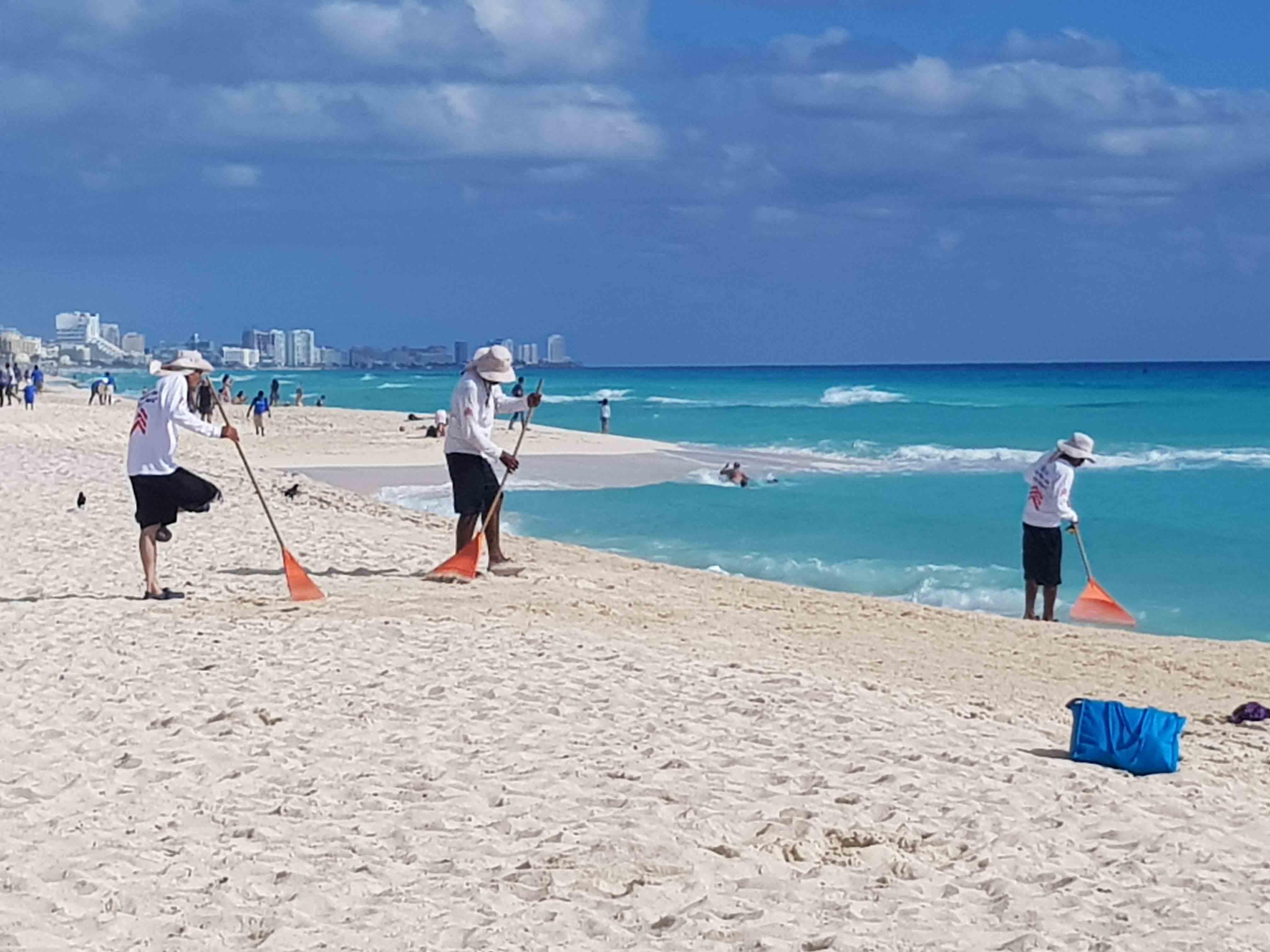 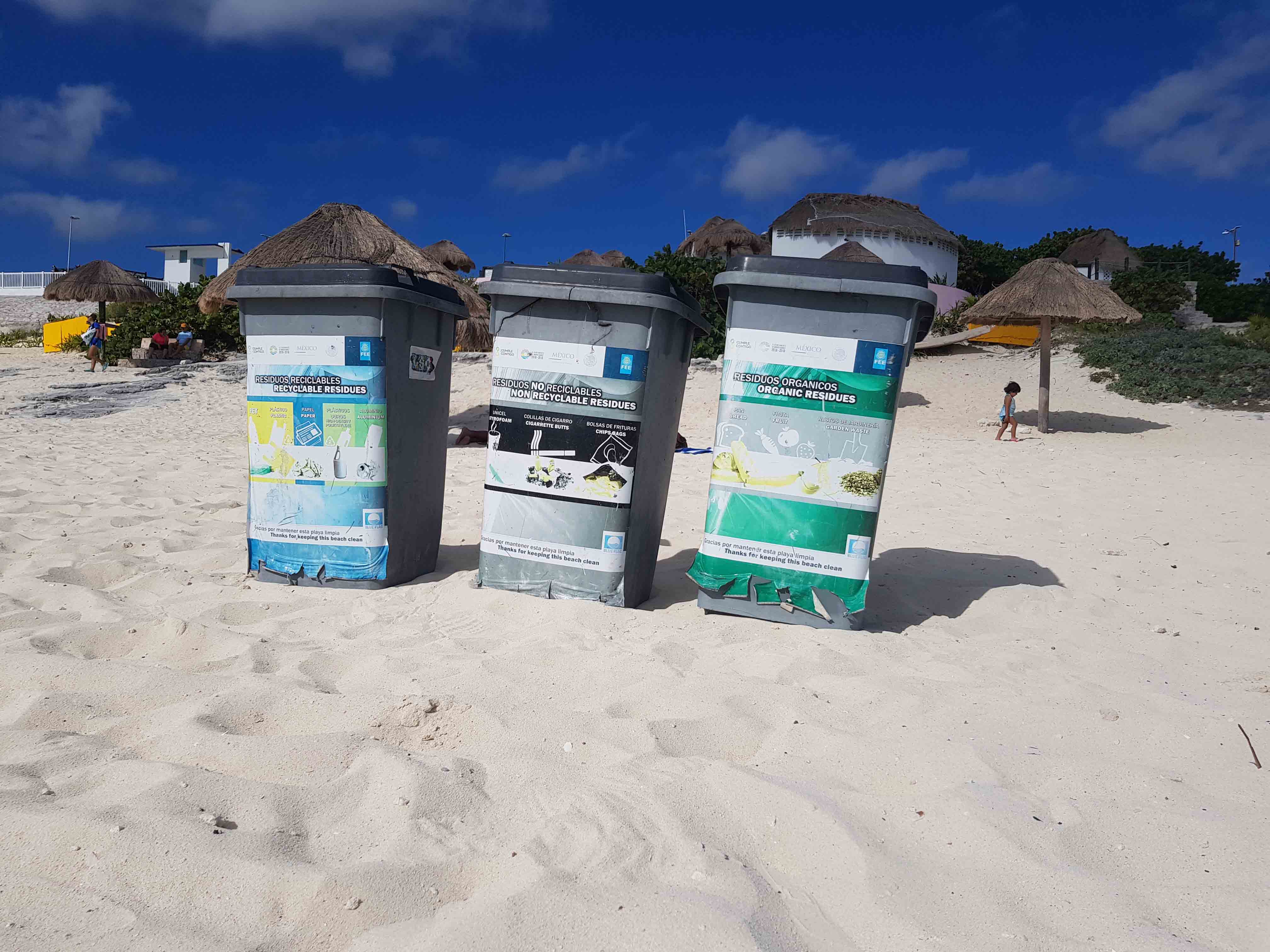 “My conclusion is that Playa Delfines was not a beach in need of a cleanup. It is a well taken care of beach and the people that work cleaning it do a good job.”

When I got back to the 4Ocean staging area the beach cleanup was winding down (11.15am). To my great surprise the volunteers had been able to collect quite a lot of trash where I had not been able to find anything! There was a pile of dirty, wet and smelly trash spread out in the central area. Where did all this trash come from? Certainly not from the beach that I had been walking on! I can only speculate but it looked like it had come straight out of the garbage bins that you can find on the beach and the surrounding vegetation that grows on the dunes leading down to the beach. I think well meaning volunteers wanted to deliver full bags of garbage to the staging area and went out of their way to collect it from surrounding areas like the beach road (I had seen volunteers there). As can be seen in the pictures that were taken right before the start of the event, Playa Delfines was a clean beach without the wet and smelly garbage visible in the subsequent pictures. 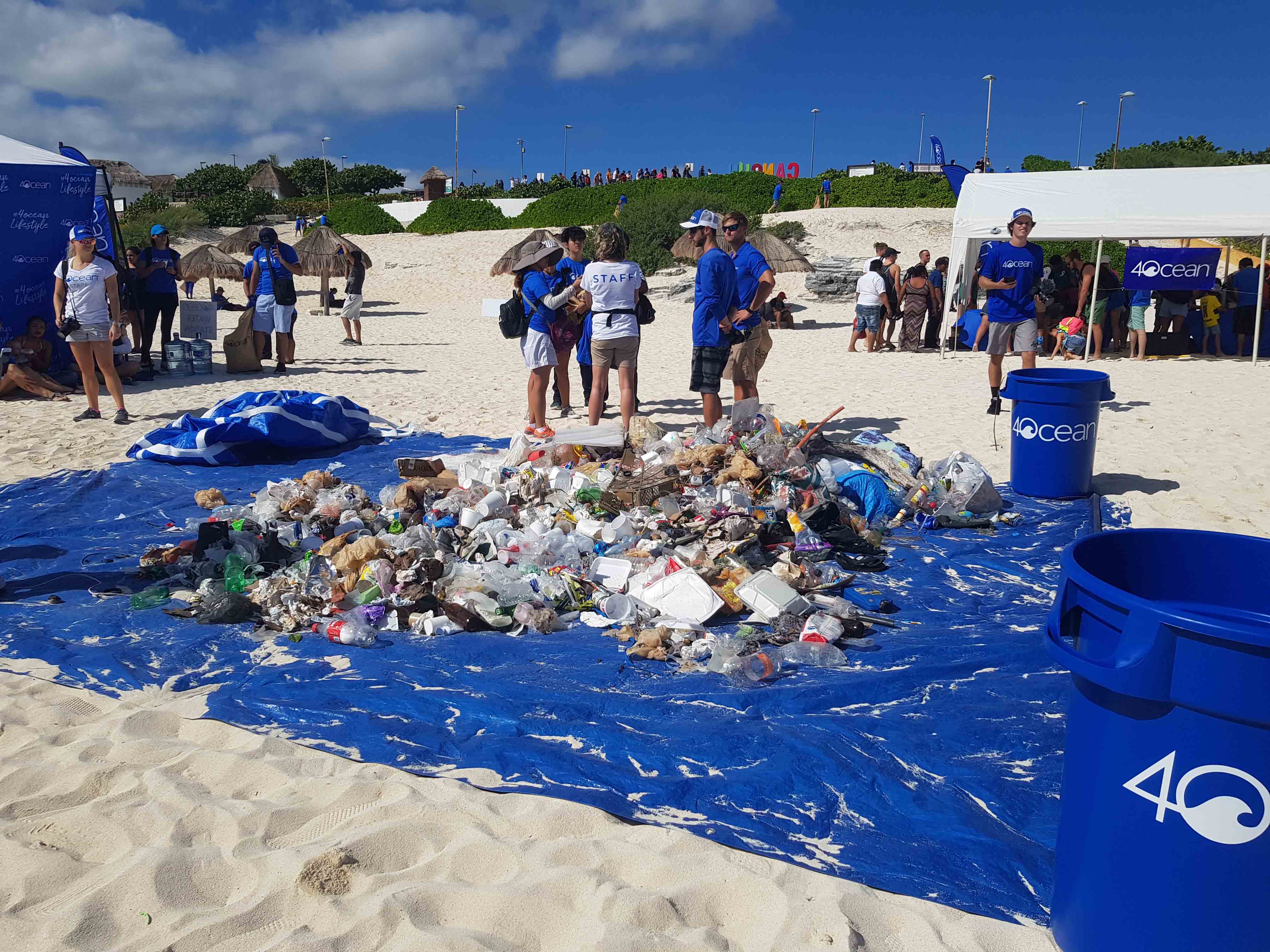 “There absolutely was no need for a big foreign company to swoop in and make it look like the locals are not taking care of things.”

The 4Ocean beach cleanup event was incredibly well organized and it is excellent to see that this company can motivate people to go out and do something for the environment. I would like to suggest they use this well-oiled 4Ocean marketing machine to clean up beaches that DO need cleaning. This event leaves me wondering if they’re honestly interested in the environment or whether the environment is just one of their marketing strategies.

Last but not least, if you were wondering about the movie tickets that were mentioned in the Facebook post? I am too. I was there early and in my opinion there were never more than 400 volunteers on the beach. If I had gone to the event expecting free movie tickets, I’d be upset.

*4Ocean is not a charity but a regular for profit company registered in the US. 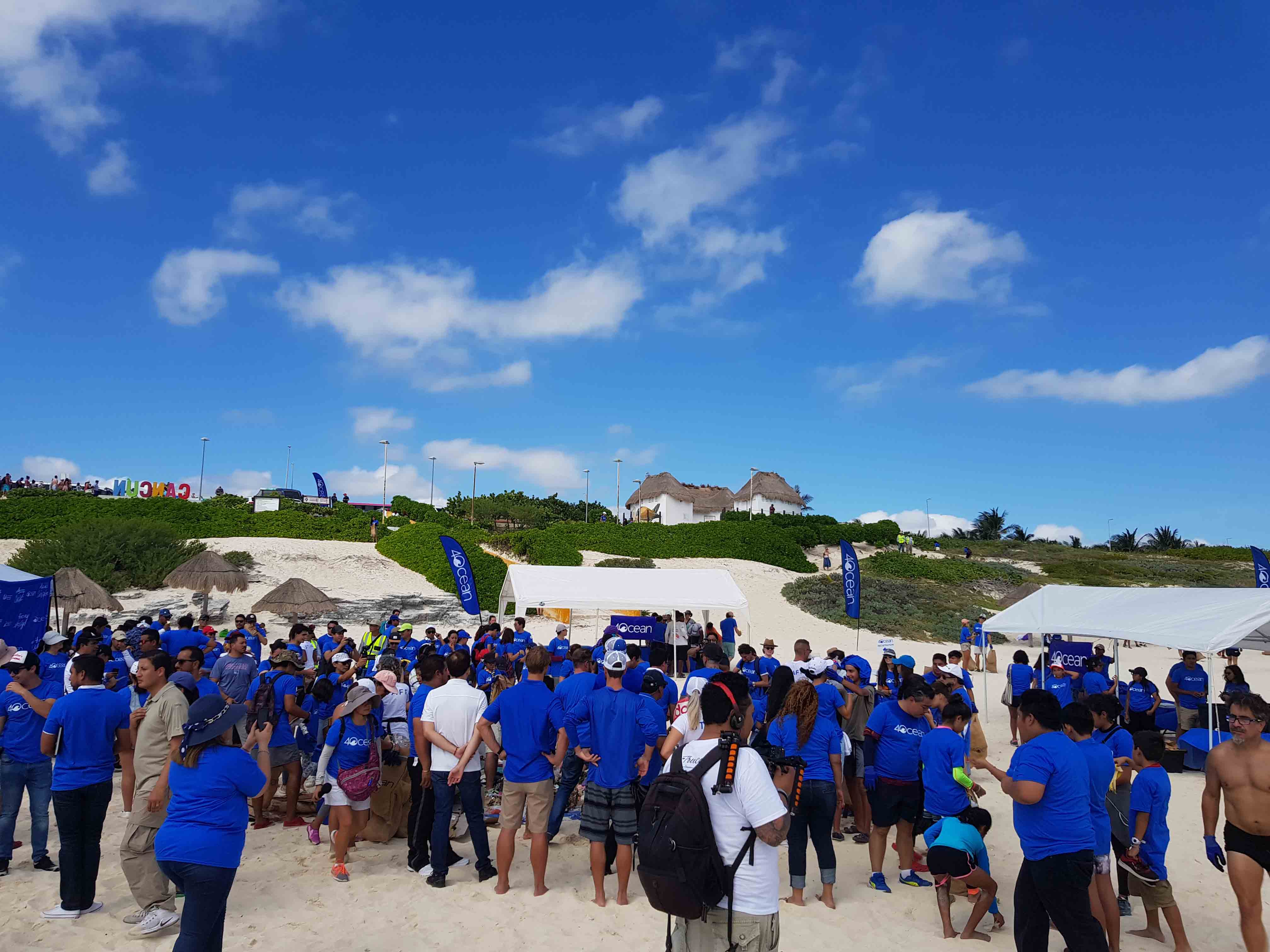