Is Sweden Really So Revolutionary? 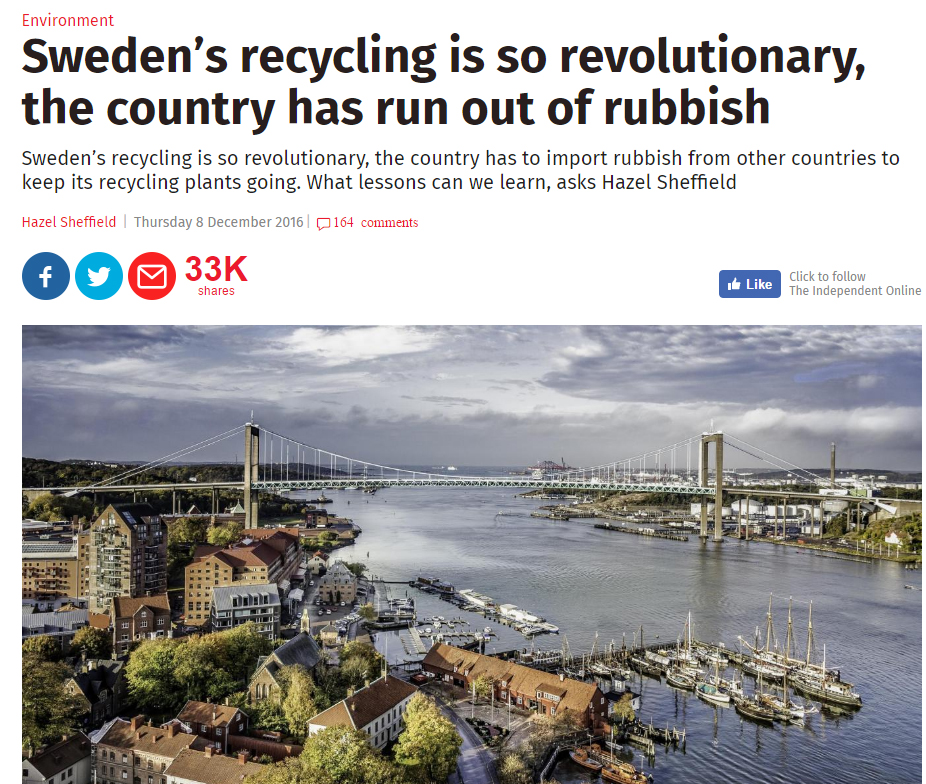 A report in the Independent suggests that Sweden is so good at recycling that the UK can ‘only dream of such an effective system’, but is Sweden’s recycling really so revolutionary?

At first glance you might be misled into believing that this wonderful country, with its incredibly clean air, stunning mountains, lakes, rivers and hugely successful pop groups has damn well got it right again.  However, delve into the article, well just past the first paragraph to be honest and all is not what it might seem.  The only reason that Sweden is importing the waste from neighbouring countries is that it uses it for fuel to power their central heating systems.  Yes it can be argued that it is being ‘recycled’ into energy, but the common understanding of recycling is turning it into something else that is more tangible.  I am not trying to take anything away from these early adopter Swedes, who recognised very quickly that there was a potential cheap source of energy here that didn’t chuck quite as much CO2 (let’s not get into the dioxins and furans for the moment)  into the atmosphere as fossil fuels.  However, such a huge reliance and investment on incineration is not something that, in my opinion, should be encouraged.

The solution to our waste management and our plastic pollution issues will inevitably require a strategic mix of behavioural, process and technological adjustments.  In some places incineration will be a part of that mix but it cannot be the single solution, nor should we even remotely attempt to imply that it will resolve all of our plastic pollution problems.

The recent paper written by McKinsey consultancy and sponsored by Ocean Conservancy focussed heavily on the academic report produced by Jambek et al, which highlighted the main sources of plastic waste.  Jambek identified that 50% of the plastic pollution came from just six countries all of which were in SE Asia.  While going into the alternative options in some detail the McKinsey report leaned heavily on an incineration solution.

We have been burning hydrocarbons to generate heat since we first learned how to make fire.  So to return to my original question, this is not revolutionary, in actual fact, given the technology we have available to us I believe it is a step backwards.  We need to stop believing that the solution to managing our ‘waste’ is by throwing into a hole in the ground, or setting fire to it.  We need to view everything we use as a valuable and finite resource – now that would be revolutionary.