This project aims to investigate linking microplastic transportation and distribution to sediment budgets and transport mechanisms at the entrances to Langstone and Chichester Harbours.

Microplastics are defined as plastic pieces or fibers that are smaller than 5mm. They are derived from two main sources. Though designed to be resistant and long lasting, plastics in the environment can become brittle and break apart. Microplastics are especially damaging to the marine environment compared to larger marine litter due to their small size, where they are commonly mistaken for eggs by wildlife and ingested. Despite the increasing concern and studies over the impacts and worldwide spread of plastics and microplastics in particular, both in and out of the marine environment, not much is known of the transportation of such plastics and how they are affected regarding coastal physical processes.

Chichester and Langstone Harbours are both highly designated areas including Ramsar wetland. They have designations such as: Area of Outstanding Natural Beauty (AONB), Site of Specific Scientific Interest (SSSI), Special Protection Area (SPA), Special Area of Conservation (SAC) to name a few. In addition, they are popular areas for both tourists and residents alike, with many pleasure and work related activities taking place in and around them. This not only makes sampling here important in terms of protecting the natural beauty of the areas for the people who use it, but also as a microcosm of microplastic transportation in coastal environments as a whole, making this area of the coast a suitable location for this study.

The overall aim of this dissertation is to investigate linking microplastic transportation and distribution to sediment budgets and transport mechanisms at the entrances to Langstone and Chichester Harbours.

Before the start of this project, sample sites were visited to establish the credibility of the project. Microplastics were identified at the sites visited, and could easily be identified when brought out of the field.

Due to the appearance and rapid proliferation of the coronavirus pandemic, the collection of primary data was ruled out in response to the UK government lockdown, which started on the 23rd of March. This not only made it unsafe to visit sample sites, but transport links that would have been needed for the collection of primary data were also unavailable. In response, secondary data was instead selected to allow for the continuation of the study.

Data from the Big Microplastic Survey was used. The data used was selected from sites sampled at both the East and West sides of Hayling Island, West Wittering beach, East Head spit and within Chichester Harbour, giving a total of 3,050 samples from 122 sites. All sites sampled were sandy beaches, as this is the most suitable sediment type to sample from.

After drying, plastics were separated into micro and meso plastics, as well as primary and secondary (whether the plastics were found as whole pieces or fragments). Due to lack of appropriate equipment, plastic pieces that could not be seen at all or well with the naked eye (<1mm) were not examined. 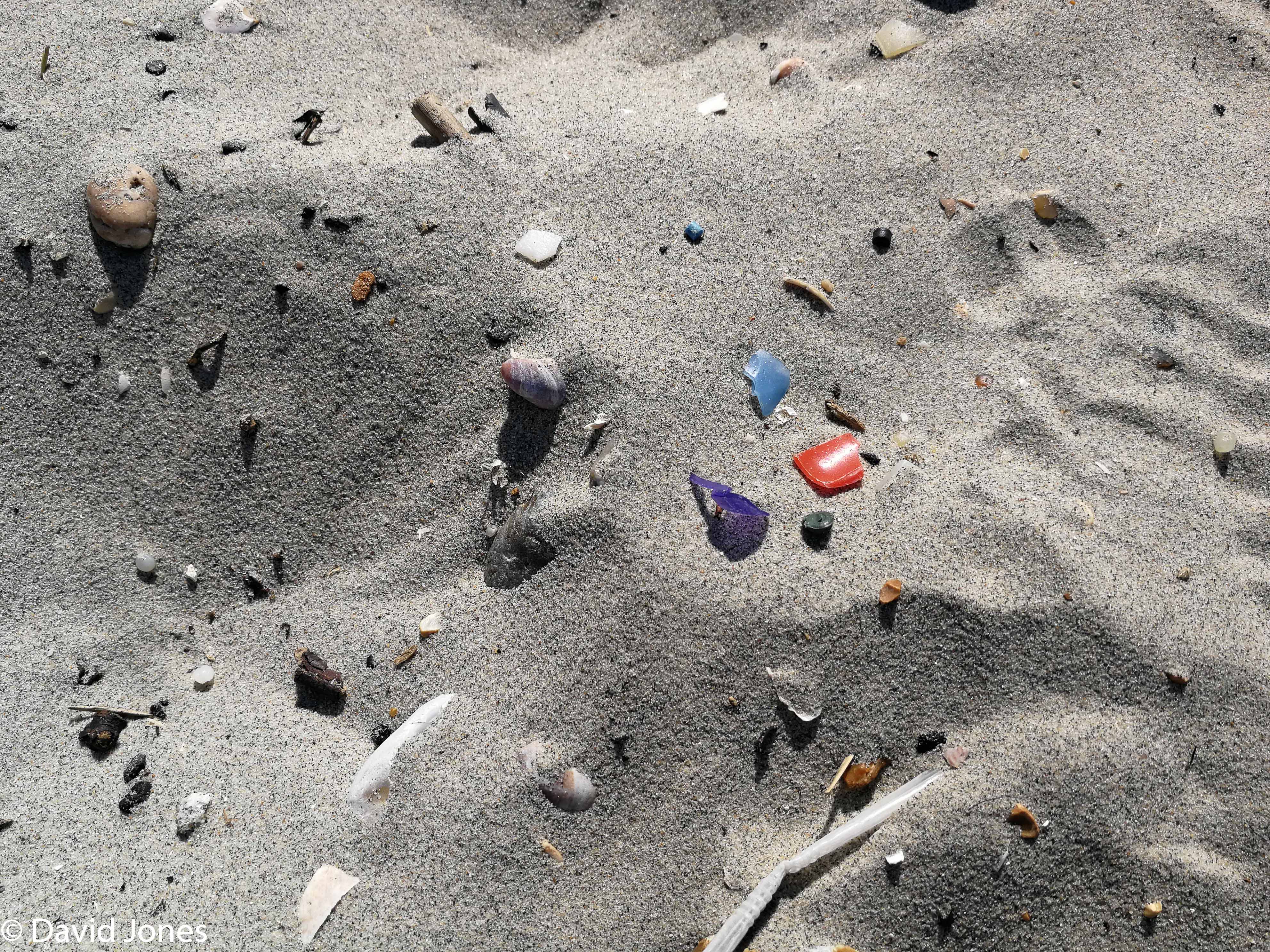 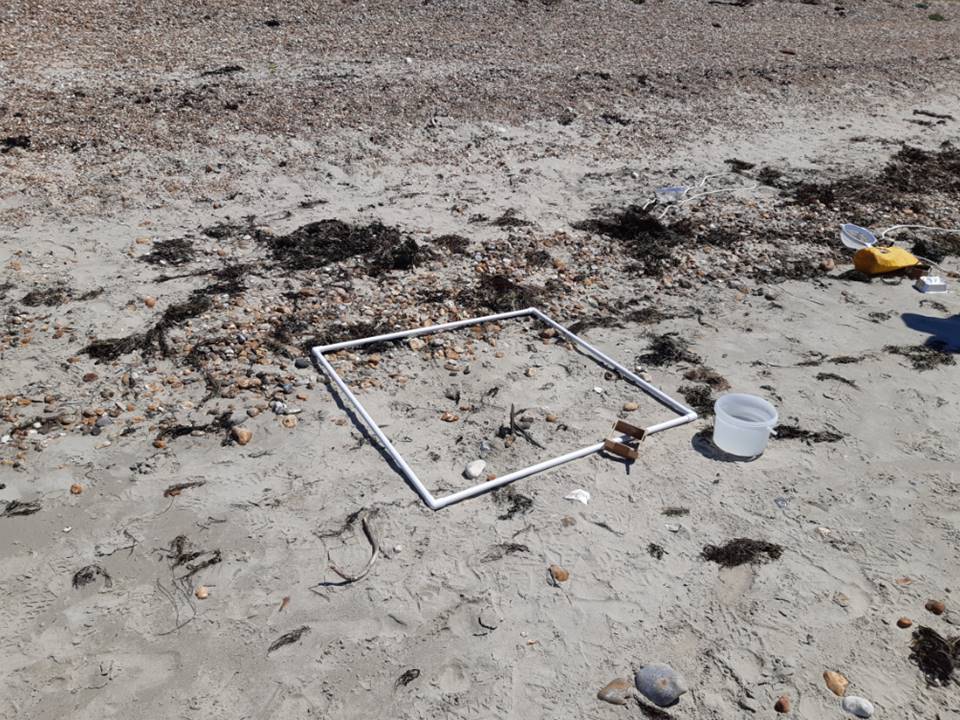 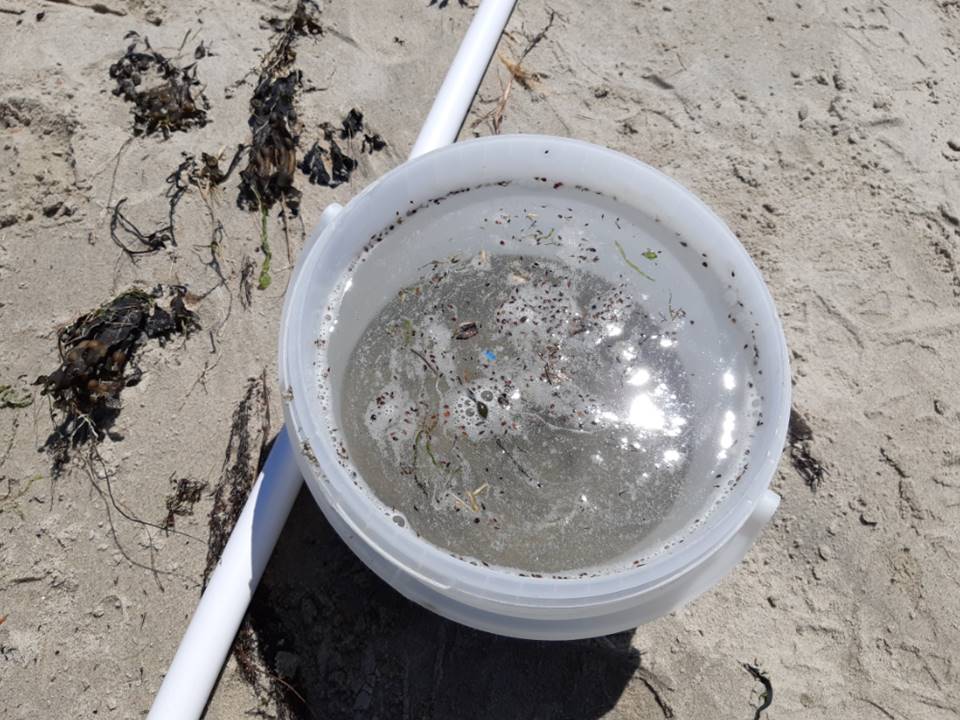 Sampling at this site has shown the generally low numbers of micro and meso plastics found on the beach. The sites towards the northern end had much higher microplastic counts, which is theorised to be floating microplastics being moved by Stokes drift and deposited in the lee of a sand dune. Sites in the southern end are unprotected from waves and wind, so leading to the low microplastic counts at these sites.

Much the same as the west side of the island, the east end of Hayling Island beach shows a general trend of northward movement of sediment. Wooden groynes along this stretch of the coast trap sediment to build up the beach, and microplastics are trapped along with the sediment. Also, rock groynes to the west are likely to have trapped much of the microplastic being transported to the beach at East Hayling, leading to the lower amounts found.

The West Wittering and East Head areas had the most varied micro and mesoplastic counts compared with the other areas. Due to the depth of the channel and the strength of the tidal current, sediment transport has not proven to be possible between West Wittering and East Hayling Island. This area is extremely popular with tourists in the summer months, with 15000 visitors expected on particularly busy days (West Wittering Estate, n.d.). As such the litter they bring can be left in these areas. Sand dunes in this area are likely to entrap these plastics and prevent their movement via wave or aeolian processes. Furthermore, the drift rate of sediment here is lower than areas eastwards down the coast. This would make it easier for sediments, and by extension microplastics, to become entrained here and stuck in a sediment sink. Aeolian transport processes are shown to dominate here, It can be theorised that microplastics on the beach would be carried by this aeolian process in the same manner as sediment and become entrained in the sand dunes, forming a microplastic sink.

The sample sites within Chichester Harbour have the highest microplastic average at 56. The sheltered nature and shallow water of the harbour means that there is limited energy for sediment movement. Coastal slope erosion has the potential to be a source of the microplastics found, as mesoplastics are released onto the shore and broken down under sunlight and environmental conditions to form secondary microplastics. This is unsupported by current literature, and would need to be investigated further.

After finishing this research, it is apparent that there is a clear link between microplastics and sediment transport and budgets. This will be useful in informing future microplastic research and cleanup efforts, as knowledge of microplastic transportation and sinks will allow for better use of available resources, so that future work can be carried out with greater efficiency. 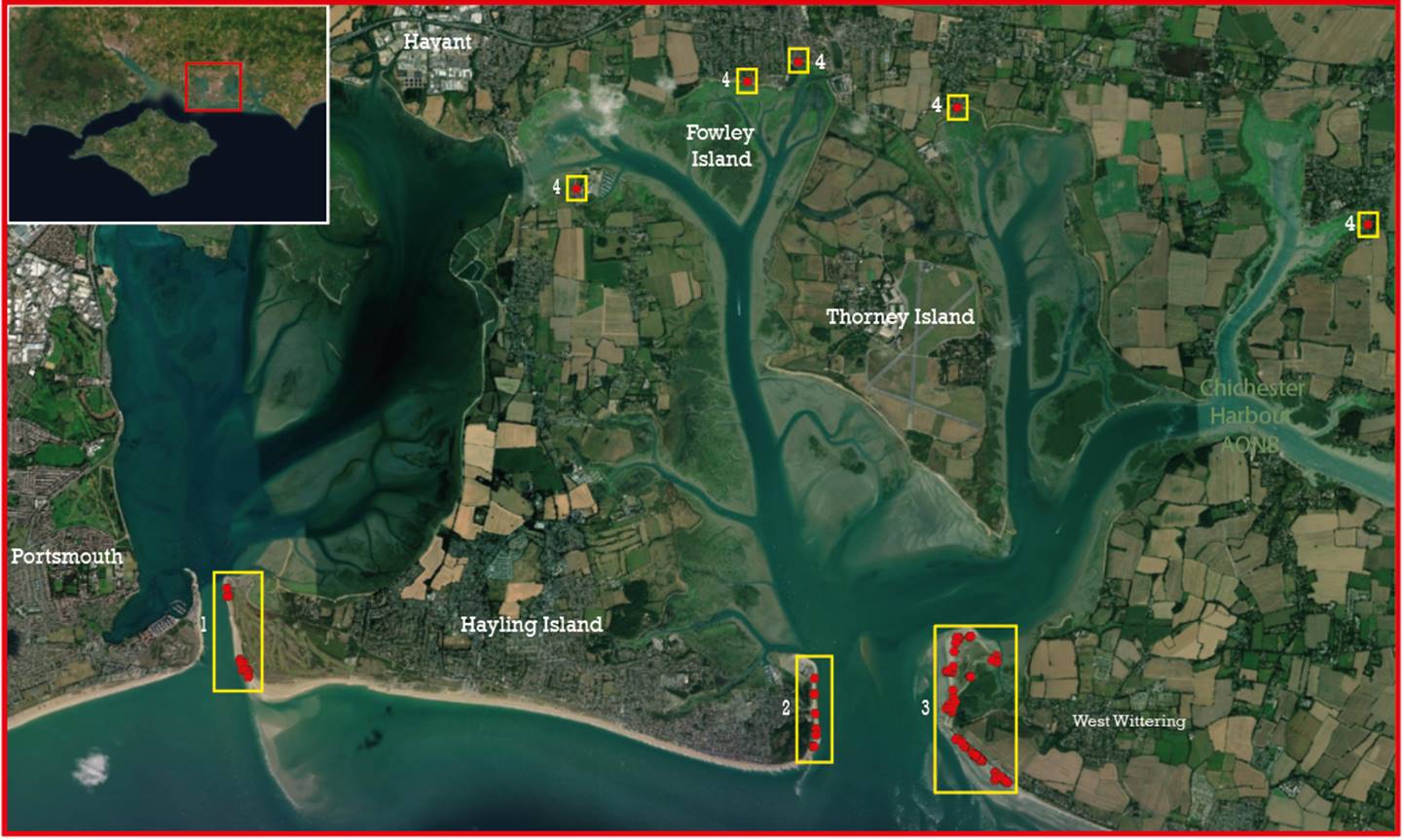 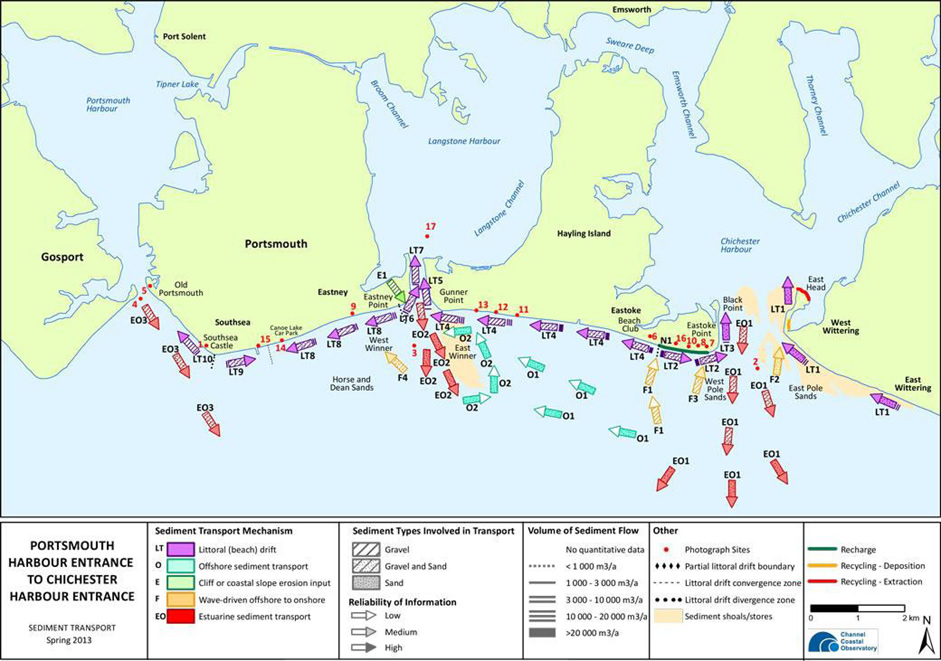 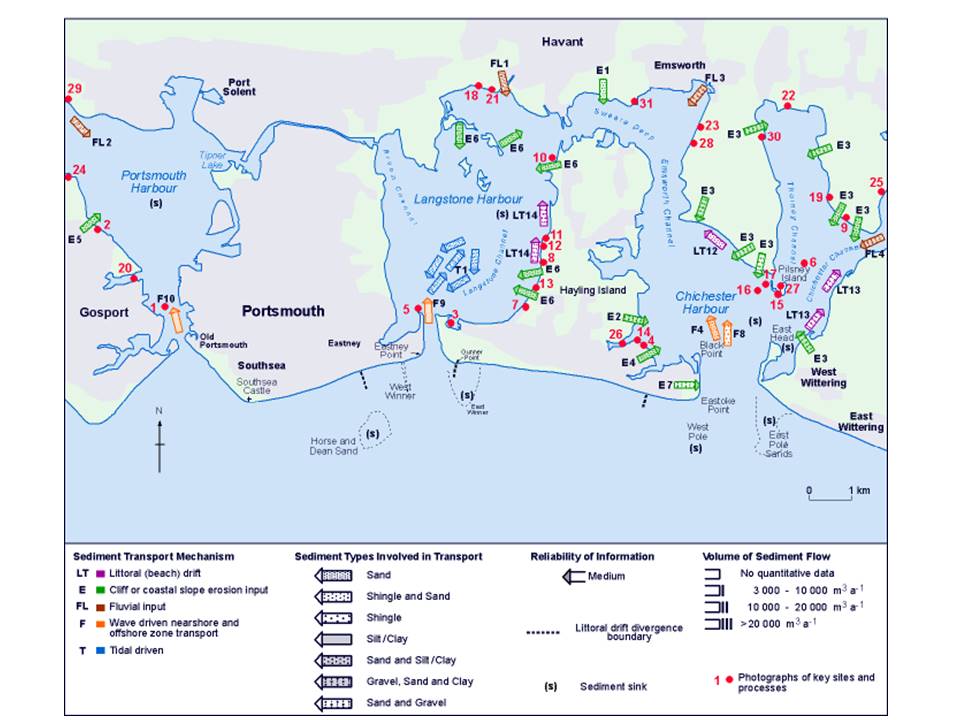