Lionfish in the Western Atlantic

“It is not the strongest of the species that survives, nor the most intelligent that survives. It is the one that is most adaptable to change.”

They may look lovely as they swim slowly, mesmerizingly around aquariums, but in this case, beauty is definitely only skin deep.  Underneath the frilly exterior is a ferocious hunter with a voracious appetite and they are devastating the coral reefs of the Southeast coast of the US, the Caribbean and the Gulf of Mexico.

Lionfish are a member of the Scorpaenidae family, or Scorpionfish, which includes some of the world’s most venomous species such as the Stonefish. Just like their more dangerous cousins these fish also have venomous spines that can inflict an extremely painful sting. However, their venom is not the major cause for concern. The biggest problem is that the lionfish are literally eating everything in their path.

93% of the lionfish that are found in the Western Atlantic basin is of the Pterois volitans species. Adults are between 33 – 40 cm long and this size is reached after approximately 2 years. Lionfish breed year-round. Mature females (> 1-year old) release about 50,000 eggs every three days for the rest of their lives. Most reef fishes only spawn once a year, so lionfish can quickly outnumber native fish populations. Lionfish can live well beyond 15 years. They’re very resilient and can live in a huge range of water quality, salinity, temperature and depth. They have been sighted in shallow waters of .3 meters and at depths over 300 meters. They are highly tolerant to temperature change and biologically resistant to most diseases and parasites that affect native fish. When food is scarce due to temperature and climate, lionfish can live beyond 3 months without eating anything at all and lose very little body mass (about 10%) as a result.  Lionfish are clearly designed to survive and dominate.

Lionfish are native to the Indo-Pacific region and the Red Sea but since the early 90’s they have been found in the Western Atlantic basin where they are an invasive species. In thirty years they have become well established.  Like many non-indigenous animals on land and sea around the world they are expanding inexorably into more and more regions whilst conservationist look on helplessly.  Being reef fish it is improbable that the lionfish migrated across the Atlantic so it is likely that the first lionfish were introduced into the region as a result of an accident, or some well-meaning aquarist deciding to set free his pets having seen them eat the rest of his fish collection. However it happened, it is unlikely that the damage it has caused could have been foreseen, or that the clock can be turned back. 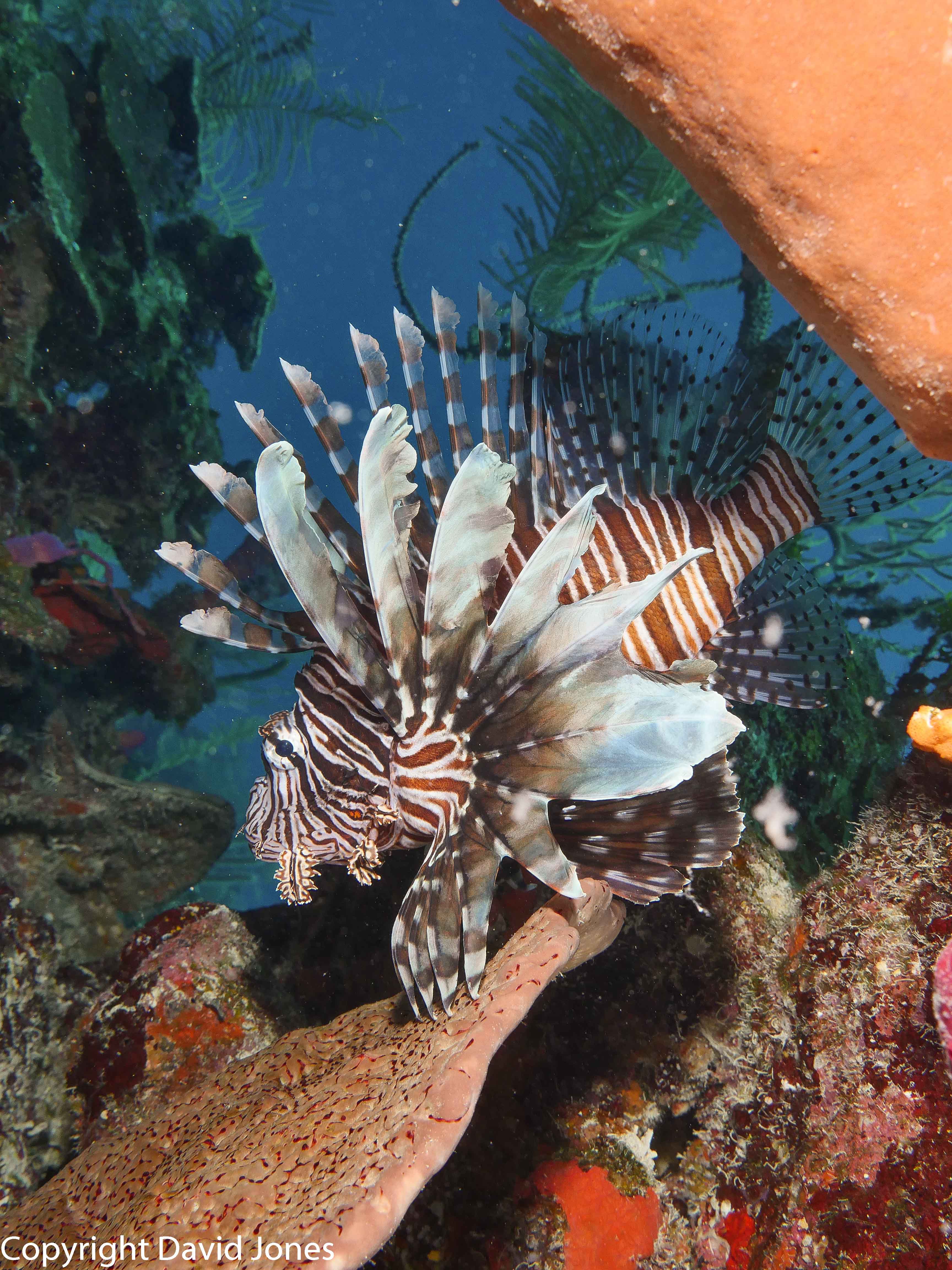 In their natural habitat, lionfish are a part of the naturally balanced ecosystem where other species thrive quite happily (albeit warily) alongside them. So the question is, why are they decimating coral reefs in the Western Atlantic? There are several reasons: The fact that the lionfish is not native means it has no natural predators resulting in it being free to feed and multiply with impunity and, as already mentioned they undertake this prodigiously.  Another problem is that indigenous fish don’t necessarily recognize the lionfish as a predator, although that may be changing as time passes, often swimming close to them in an attempt to hide from other predators. Lionfish are also indiscriminate, they’re not picky, and will eat anything within range as long as it fits in their mouths. They can eat anything up to half their size including fish, invertebrates and mollusks – shrimp, crabs, juvenile octopus, squid, juvenile lobster and seahorses are all on the menu. They have enormous appetites and can eat dozens of marine creatures in a short space of time.  It’s estimated that a single lionfish can reduce the number of native marine creatures on any given section of reef by around 79% within just 5 weeks.

The inevitable consequence is that the ecosystems of the coral reefs are becoming unbalanced. They reduce the levels of fish biomass to critical levels across all species, including the grazers that keep the coral clean and other fish healthy and free from disease. They take the food from native predators, reducing their numbers.   Essentially they are out-breeding, out-eating and out-competing every other native fish in the Western Atlantic Ocean, Gulf of Mexico and the Caribbean Sea.

So what can be done?

Currently the biggest effort is in trying to minimize the impact of the lionfish on the reefs by removing them.  Lionfish don’t respond to bait and are difficult to catch with a net. So at the moment lionfish are being hunted by divers using a spear. This may seem inefficient and in comparison to most commercial fishing techniques it is, but because lionfish consider themselves as invulnerable and move slowly they are actually easy for spear fishers to catch. Organized competitions can catch hundreds at a time. However, these one off events do not take account of the lionfish’s tenacity for survival and very soon they are back. 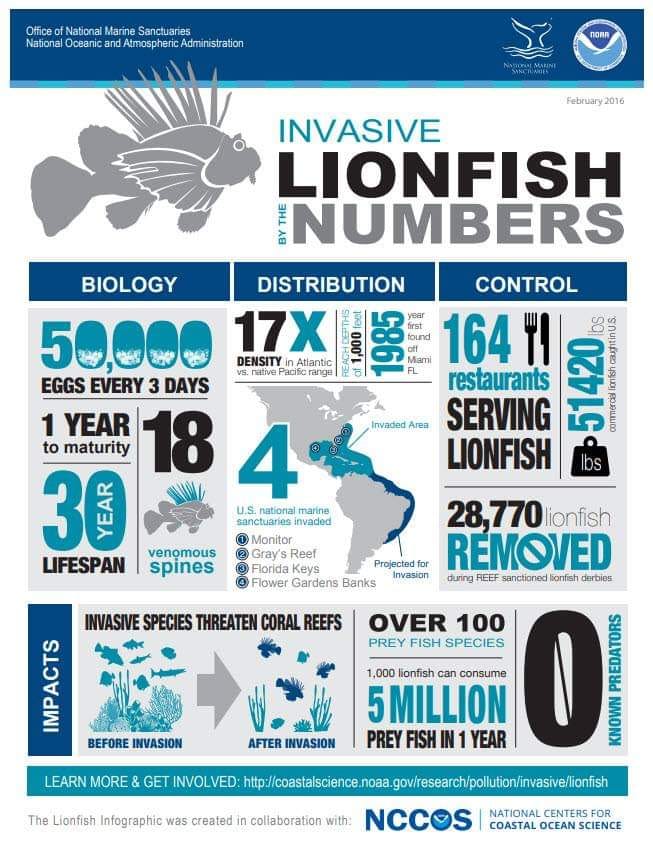 Lion fish can never be totally eradicated from the Western Atlantic region, but their numbers can be kept at bay if there is a strategic management plan. Unlike most fishery management plans that look at increasing stock levels, this one needs to look at measure for reduction – in essence we need to overfish for them. And the reason we overfish some species is because we like to eat them.  The good news is that lionfish is delicious, so a crucial part of this plan will be the development of the species as a food fish, a delicacy, THE item of choice on the menu.  Basically we have to eat it if we are going to beat it.

The solution sounds simple but it isn’t. At the moment economics of hunting lionfish don’t stack up and whilst it is a good sideline for divers, as a food source there is not the demand to support higher market prices, meaning that hunting them as a commercial enterprise remains difficult.  Government support through subsidies will be required whilst the popularity for eating lionfish develops, but the potential for a reduction in numbers by human consumption is there. So next time you are ordering fish and chips, why not see if they have lionfish on the menu. It’s delicious. 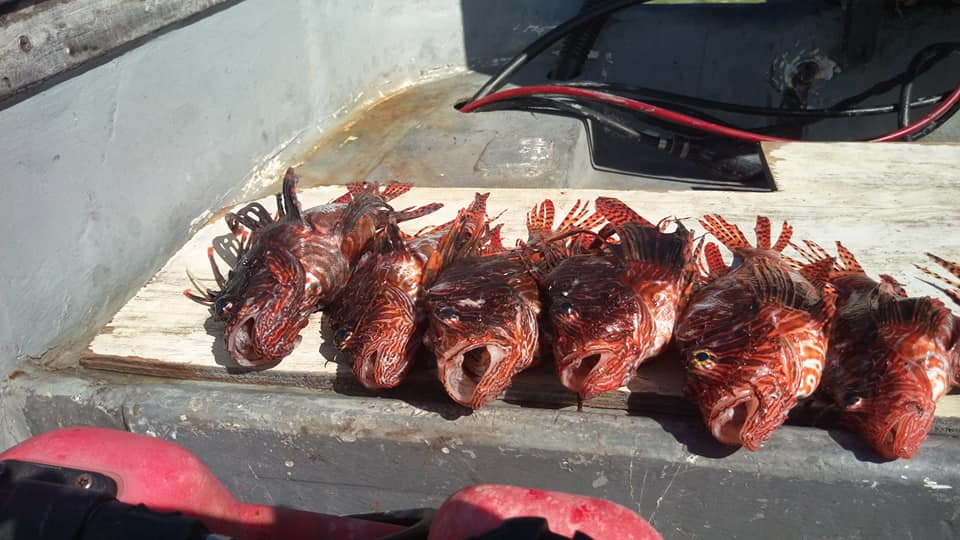 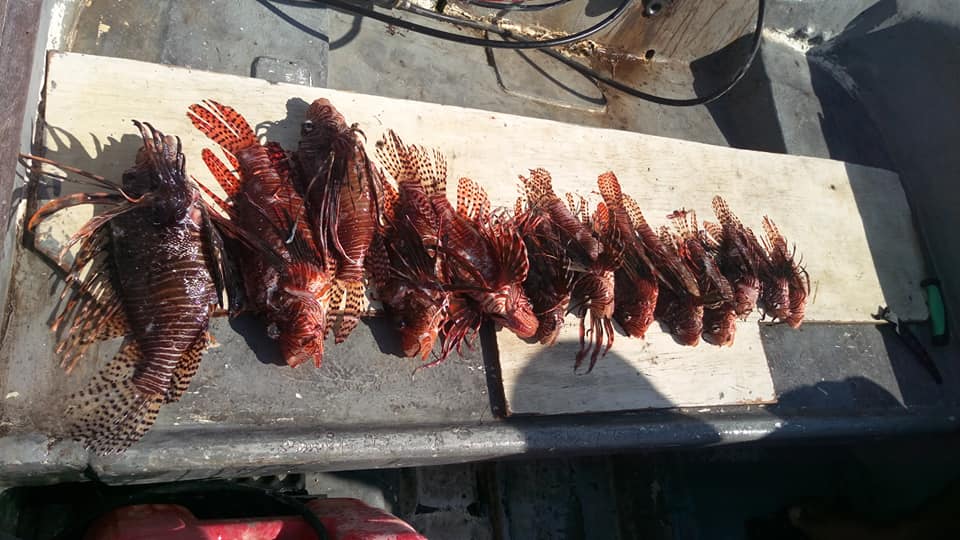